Sep 18, Sud rated it really liked it Shelves: comics. Well, "August" was a very strange story. It is the story of a dwarf who knew Octavian Caesar and spent a day as a beggar with the Emperor. I call this story odd in the interesting view it had of Octavian.

But, again I will make due for artistic license. So a strange story and one I may have given 5 stars too, but after a certain amount of "fiddling" about with history, even taking into account artistic license, I find myself annoyed. Not sure where Gaiman was going with that. Still an interesting read and completely different than what is common nowadays for "comic stories". So 4 stars. May 14, Kaushik Tadvi rated it it was amazing. What a frigging awesome issue!

So I call myself Imperator -- commander. And they follow me, and obey me as they would a King. They follow leaders--queens or kings, Chiefs or Emperors. We tell them what to do. And they do it. She looks like a fresh-faced year-old way out of her depth, and I'm not sure if I like the way Dillon portrays her - Rose has been through quite a bit in her young life, so she shouldn't look so young. Hempel actually draws her a bit better. Another reason why Dillon's drawing of Rose is a bit off to me is because she does end up banging young Jack Holdaway, and this Rose Walker looks weirdly teen-ish to be doing stuff like that.

When Rose eventually seduces Jack, in issue 64, she looks old enough to be doing something like that which doesn't make it a good idea - she might have asked if he was married before throwing herself at him, although he's a scumbag for taking her up on the offer.

Dillon's art is very nice - his precise lines help create the idea of a very proper British nursing home - and his inks help make the old women look weathered but not decrepit, but I still get weirded out when I see his Rose Walker. I guess we all have our strange hang-ups. Doran drew issues 20 and 34, and her contribution is notable for how it shows the way inking can affect the pencil work on a comic book.

Doran's pencil work is perfectly fine - it's solid and unspectacular, and while most of the artists on Sandman can draw women who look like women, Doran does a wonderful job in issue 20 of drawing women's clothing, which is something many artists struggle with everyone in issue 34 is in pajamas or robes, so it's not as impressive.

The contrast between Rainie's "skin condition" in issue 20 and the very nice clothes that she and Della are wearing is striking, making Rainie's plight even more awful. Doran is also fastidious about the details of Rainie changing the elements of her skin, which brings home the horror of someone who can mold her features like clay. She doesn't have a lot to do with the fantastical, but her depiction of Ra reaching for Rainie is terrifying because she draws him so "realistically.

Robbie Busch burnishes the issue with earth tones, so that Rainie looks more out of place she has green hair and so that there's a suffusion of nostalgia for better days that Rainie can never reclaim. When Death shows up, it's natural to color the book more starkly, but Busch never forgets that Rainie must seek supplication from the sun god, so the sunset she sees when she dies is beautifully colored with oranges and browns tinged with the blue of a twilight sky.

It's a nice synthesis of pencils, inks, and colors to make a gorgeous comic. Doran wasn't so lucky in issue George Pratt and Dick Giordano on the final three pages inked her, and the results are less-than-stellar in what might be the single ugliest issue of the original print run. I'm not sure if Doran's pencils were too loose, but Pratt does her no favors, with his scratchy line contrasting wildly with her more solid style, so that everyone looks half done.

Unlike Jones, Pratt either uses too few inking lines or mars the pencils with too much black, masking facial expressions and losing subtlety. There's a starkness to Pratt's inks that might work with a different penciller, but which fails utterly to do anything with Doran's work. I tried to contact Gaiman about the artists on this book and when DC began letting him choose them, but he never got back to me, so I don't know if he had reached that point here.

Shawn McManus was drawing the bulk of "A Game of You," and this issue focuses instead on events back in New York, which might be why it's so different than McManus' style. Perhaps that's the point - this is brutally "realistic" in the way that the Land is not, so it's in stark contrast to what Barbie is experiencing at that moment. But Pratt and Giordano certainly don't do the work justice, and neither does Daniel Vozzo, who was coloring the series by this point. The first page is truly ugly, with what appears to be hastily-scratched figures Hazel and Foxglove and two colors - pale blue for the sheets and dirt-brown for everything else.

It's really too bad. But, because this is Sandman , the single issues aren't the only place you can find this issue, and for the Absolute Edition, Doran inked it herself and then Vozzo recolored it. The result is amazing - Doran's precise inks match her precise pencils, which adds so much definition to the line work it's almost unbelievable.

George's face, for instance, is far more horrifying when Doran inks it, and when Thessaly is trying to find her way to the Land, it's much easier to see Morpheus as he appears in the bright light. Even the fact that Doran under-inks the section with the bright light helps, because it suggests far more than Pratt's more pragmatic approach did. Vozzo's recoloring provides more contrast, which helps make more Doran's art more distinct.

Take the first page again - Doran does away with a lot of Pratt's blackness, using it more judiciously but effectively. The crows that "attack" Hazel and Foxglove are much more distinct, while the ladies' terror is more palpable. The way the crows dissipate is far clearer, and while Vozzo does keep a lot of the brown, he makes sure that Foxglove's hair is blonde, for instance, and that Hazel's shirt is orange, so the entire page is more legible. Obviously, not every series has the following of Sandman and DC isn't going to put the money into "correcting" poor art jobs, but it's nice that they allowed Doran to go back to this issue and fix things, because it really was a mistake putting Pratt on her pencils.

Pratt's a pretty good artist, but his style is almost diametrically opposed to Doran's, and issue 34 is a travesty as a single issue. As part of the Absolute Edition Dringenberg is the closest Sandman ever had to a regular artist; he's one of the co-creators, and he was either the penciller or inker for 13 of the first 16 issues.

For the first four issues, it appears that his inks help make Sam Kieth's naturally cartoonish art a bit less so - it's still very much Kieth's work, but Dringenberg tempers the whimsical nature of the pencils when he needs to, most notably in issue 3, when John Constantine hangs out with Morpheus. Despite the horror overtones of the first four issues, issue 3 is the only one that deals with a relatively innocent victim, and Dringenberg's inks when Gaiman reveals Rachel in bed makes the drawing far more heart-breaking than Kieth could do by himself. If we consider the somewhat comedic consequences that Alexander Burgess experiences in issue 1 horrific for Alex, of course, but morbidly humorous for the reader , it's clear that Kieth is perfectly fine with some aspects of the story, but not others.

After skipping issue 5, Dringenberg took over full pencils with the harrowing issue 6, assisted by Malcolm Jones on inks. The change is apparent almost immediately. The first two pages of "24 Hours" are a different style than Kieth, true, but not too radical. Then, on page 3, when the Fletchers enter the diner, Dringenberg draws Garry as a hulk of a man, and the flyaway hair and block of a head he gives Garry is just Dringenberg needs to make Garry a bulky guy, because later in the issue he becomes the leader of the pack, and when he turns into an animal, his bulk works to his advantage.

A few pages later, Dringenberg shows John Dee for the first time, and he's far more terrifying than when Kieth was drawing him.

Kieth's Dee was far more of a typical superhero villain - ugly, sure, but more in line with the kind of "ugly" we see in the Red Skull, for instance. Dringenberg's Dee is a deformed monster, with stringy hair, beady and sunken eyes, and animal teeth that Dringenberg barely shows, as his mouth is drenched in Jones' inks. He's barely human, and it becomes clear that the book has become less of a standard horror story that DC might have published in the s and more of a true horror story, one that the reader can't escape from.

Unlike Kieth, Dringenberg uses mixed media to add to the effect he's going for - he creates collages to show the "unreality" of the fantasies of the diner's inhabitants, much as he does later in issue 7, when Dee fights Morpheus, and then in "The Doll's House" at any number of moments. Gaiman, I'm sure, had a lot to do with the design of Death, but it's Dringenberg who first draws her, in issue 8, and it's that iconic representation that lasted.

Death's hair, of course, is ridiculously Eighties, but Dringenberg does a superb job showing how "human" she is compared to the stoic Morpheus, as she veers from concern to anger easily as she speaks to her droopy brother. Once again, we get some classic panels from Dringenberg, such as the panel where Morpheus looks away and in the background, we see the shadow of Death's wings. It's a beautiful image, and it's largely due to Dringenberg. 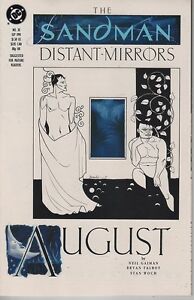 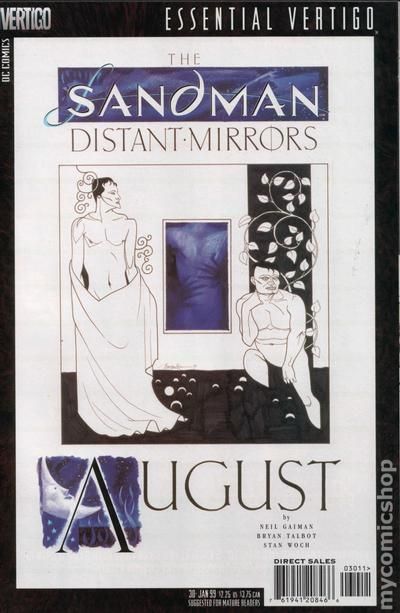 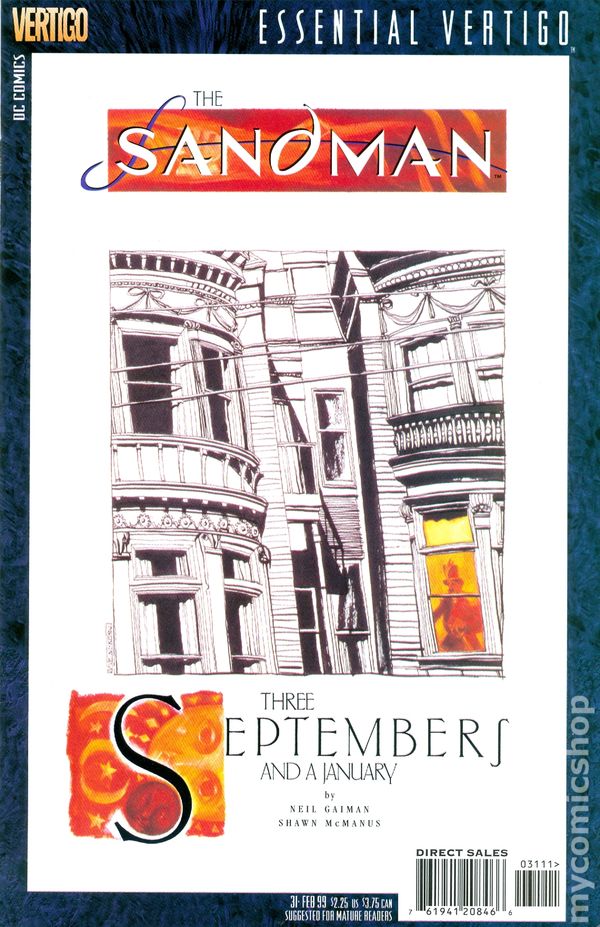 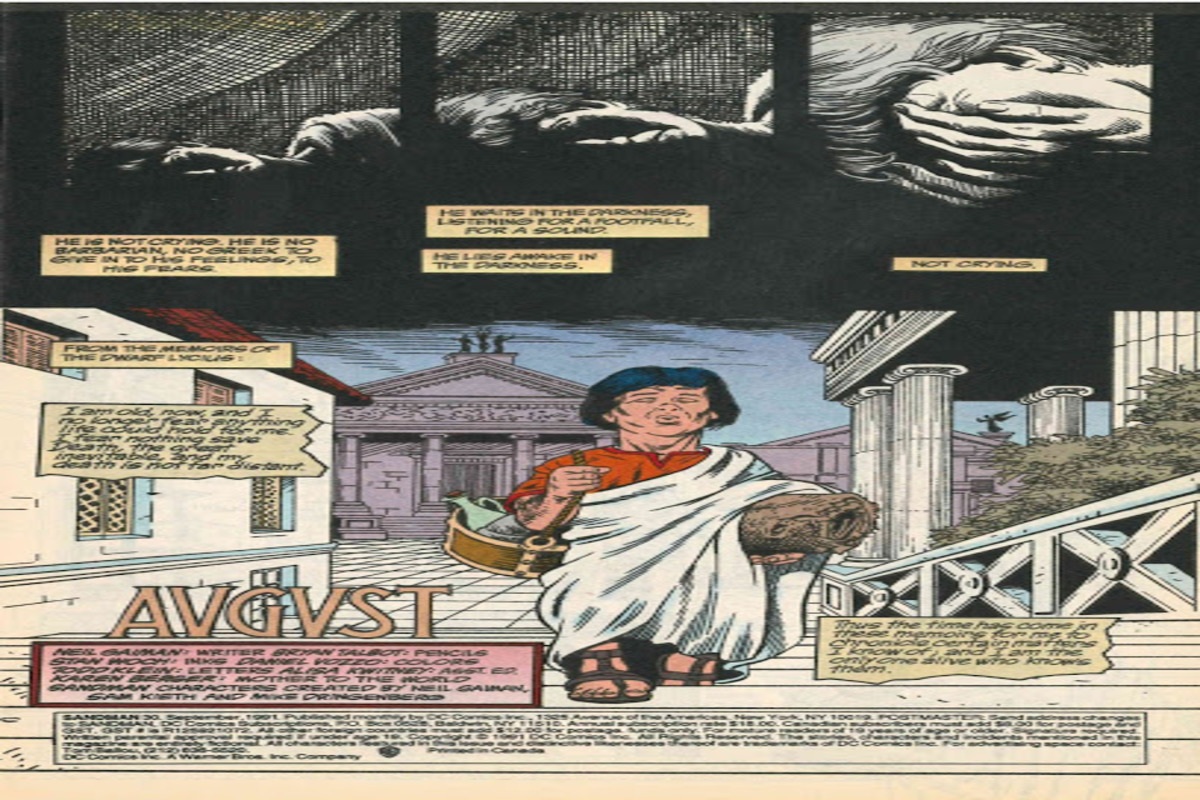