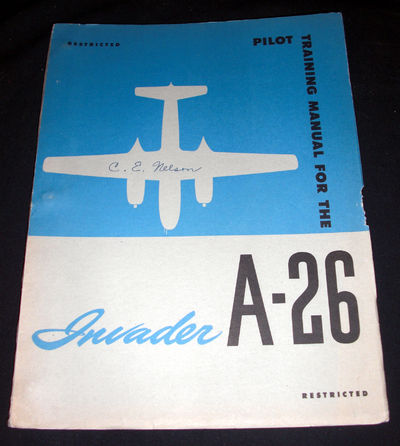 Whatever the case, this is the only photo I have ever seen of these bubbles. This view is from the front of the plane looking toward the back. Here is another view of the upper turret. This is from the tail of the plane looking forward. You can see an antenna, then the gunner's periscope lens, the gunner's escape hatch, and then turret itself. Invaders that were supposed to go to the 5th Air Force in the Pacific had the ventral turret removed in favor of an additional gallon fuel tank. The Ventral Turret is pictured below.

The gunner's periscope sight can be seen in the glass bubble. These photos shows the gunners periscope.

For example, in cases where supplies were scarce some planes were equipped with fewer guns, as is the case with of the th Bomb Group. It is one of several planes in that unit to use only 1 gun in the underwing pods. Later production models discontinued the use of the underwing gun pods in favor of 3 internally mounted. Here, Marvin Lutnesky, an armament technician for the th Bombardment Squadron, nd Bombardment Group adjusts the firing mechanisms for the internal wing guns on a plane in Korea. The pilots had a heads-up display HUD that included a gun-sight that would allow them to fire the nose and wing guns directly.

During the Korean War the loadouts changed to suit mission needs. One common loadout was: 10x lbs bombs 6 in bomb bay, plus 2 under each wing - 5, lbs total. An Invader from the 3rd Bombardment Group drops a napalm bomb on enemy ground forces during This photograph shows an Invader from the 13th Bombardment Squadron being loaded with "blue devil" training bombs at Yokota Air Base, Japan in July, During the Korean War the Invaders flew a lot of night missions. During those times flares would be fired over the target area to illuminate the ground so the bombers could make a clean hit.

Armorer Marvin Lunetsky loads flares onto a plane before a mission. A pound bomb hangs behind him. All invaders also had a Mk33 bombsight in the gunners compartment, near the bomb bay. This bombsight could allow the Invaders to drop bombs even without a glass-nosed Invader to mark the target. They could carry as many as 16 rockets if they traded out the fuel drop tanks or wing mounted bombs. They could also be equipped to carry 12x 4. Alternatively, they could be fitted with the 2. Invader "Feeding Frenzy" showing an array of missiles on the wings. A loadout of 7 rockets per wing was fairly standard.

This illustration shows the launching system for the aircraft rockets that were common on Invaders. Note how skinny these rockets are compared to the standard 5" rockets pictured above. These training rockets are 2. Although not commonly used, the Invader was capable of carrying the M8 Rocket system. The M8 Rockets were small 4. Although these photos are from an A Havoc, the same launcher system could be equipped on an Invader in the same configuration.

According to the Official Pilot Training Manual for the A Invader, published by the Army Air Force Office of Flying Safety, the Invader could carry 2 standard torpedoes in the internal bomb bay, released by the same button that drops the bombs. Although capable of this feature, it was never used in combat.

The majority of the Invaders that were earmarked for the Navy were cancelled due to World War 2 ending. When the Navy did acquire Invaders in the post-war period they were used as utility planes for towing targets. The following two illustrations show a torpedo coming from the Invader comes directly from the Pilot Manual. Page 61 of the Pilot Training Manual describes the Invader's torpedo capabilities: "A single-station panel is provided between the forward and aft bomb bays to carry two torpedoes.

The A is an extremely versatile offensive weapon. It has tremendous strafing firepower. It can bomb from various altitudes down to skip bombing, and it can launch torpedoes. But remember, although there are 24 bomb stations altogether, only 16 of those stations can be used at any one time. Further instructions are found on page "Torpedo Stations: Two torpedoes may be loaded as alternate armament. When torpedoes are carried, the bomb rack panels and the removable portion of the front bomb bay rail are removed.

The bomb bay doors must be left open. Release your torpedoes electrically by the bomb release button with your torpedo circuit switch ON. Salvo your torpedoes manually with the bomb control salvo lever or switch in some models.

The glass nosed Invader was designed to be a guide to pinpoint bombing targets for other bombers in the group. Later versions of glass-nosed Invaders were sometimes converted to photo-reconnaissance versions that gathered intelligence. The primary feature of the glass-nosed Invaders is a bomb-sight that the bombardier-navigator would use to sight the target. Several different versions were used, but the Norden Bombsight also used in the B was the most common. To the right of the bombsight is a trapezoidal panel. This panel is a hatch that opens in which allows the bombardier to clean the exterior of the glass during flight.


Seller assumes all responsibility for this listing. 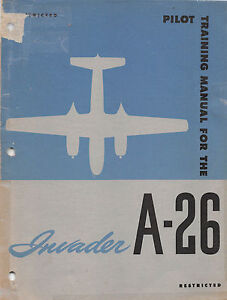 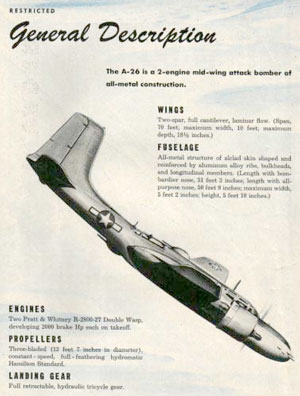 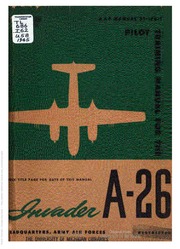 Related Pilot training manual for the Invader, A-26